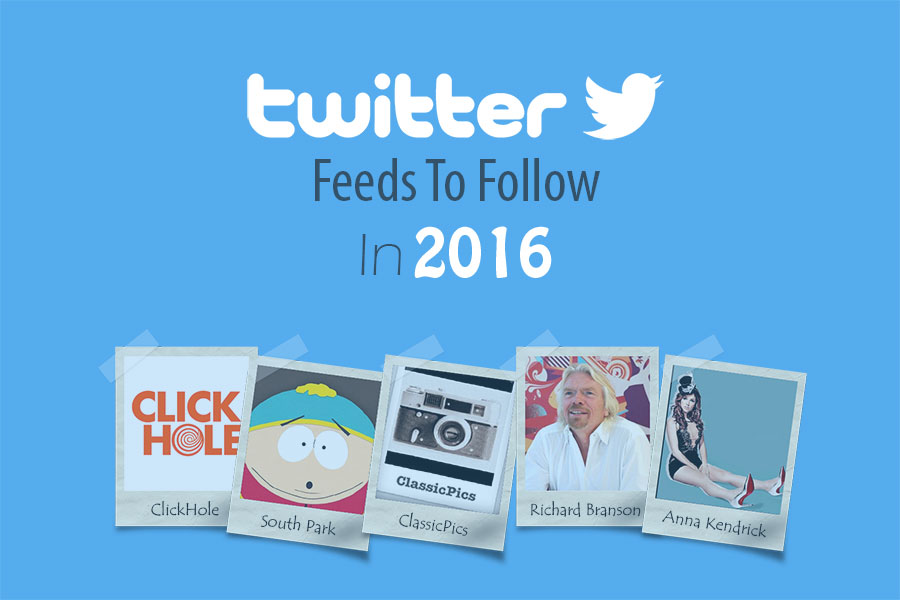 As major tech companies go, Twitter tends to be relatively stagnant. Every now and then there’s some news to talk about, such as when the company dropped character restrictions for Direct Messages last year, or when its design is altered slightly. But for the most part, Twitter simply lives on, and it’s up to the users to provide the headlines and intrigue.

Fortunately, the users always do just that! And that makes Twitter pretty much continually exciting. So if you feel like you could be getting a little more out of the messaging service, here are a few delightful Twitter accounts you should consider following heading into 2016.

Clickhole is one of the better ideas to spring up on the Internet in the past couple of years. It was officially launched in the summer of 2014 but really grew up throughout 2015 as an Onion-esque parody platform. The stated “core belief” on the Clickhole website is that “all web content deserves to go viral,” which is of course a sarcastic statement mocking the likes of Buzzfeed and Upworthy. And that’s just what Clickhole does: in much the same way that the Onion creates fake news stories, Clickhole creates nonsense lists and quizzes—and often tweets them out to followers’ delight. If you feel like you’re in need of a random stream of utter ridiculousness to lighten up your everyday life, go ahead and follow. You’ll soon be treated to delightful updates and articles such as “Things Only People With Incredibly Sexy Parents Will Understand,” or “11 Dreadful People Who Cut In Front Of My Son At His Baptism.”

Worth over $5 billion and best known as the founder of Virgin Group, Sir Richard Branson may come across to some as a just another billionaire. But he’s actually a pretty fascinating man—amusing, socially conscious, and sometimes surprisingly wise. Yes, he’s had a few controversies over the years (what billionaire hasn’t?), but he’s a man worth listening to if you’re open to general life advice from time to time. Branson’s average everyday tweet might be something along the lines of his recent “anybody who tells you they don’t make mistakes has just made one,” but he also sometimes links to existing articles (often his own), such as one on why you should never feel guilty taking a break.

Last year, this account headlined a CNBC list of must-follow Twitter accounts, and it’s since really proven to be one of the more educational accounts out there. Basically, @History_Pics sends out a continual stream of surprising and revealing photos from history. Recent examples include everything from a photo of Hillary Clinton at age 22 to a look at The Beatles building a model train set in 1964. This account isn’t too complicated, but it has the rare power to make you feel like you’ve gained a better understanding of the world.

Once a crude cartoon comedy, South Park has risen to become the face of modern satire, and its creators have mastered their art across numerous forms of media. Matt Stone and Trey Parker have created 19 seasons of television, multiple films, the infamous Book Of Mormon comedy musical, and a number of South Park video games. Even among the games, variety extends from the unorthodox RPG “Stick Of Truth” to themed slot reels at Betfair’s arcade section. The latter attracts thousands of players in a given day merely by employing South Park backgrounds and character designs in two completely different games. Given all of this success in media, it’s only natural that South Park has also become responsible for one of the better Twitter accounts out there. @SouthPark often just releases quotes and still images from episodes, but occasionally the timely satire the show does best appears powerfully, such as when numerous gun-related tweets (“there’ll be so many guns that nothing bad can happen”) popped up as the gun control debate raged through December.

Everyone appreciates when there’s a high profile celebrity who just seems “real,” and it doesn’t get much more real—or wise or amusing—than Anna Kendrick. Even the fact that a superstar actress had to resort to a numbered Twitter handle just feels genuine (even if it’s a play on a type of rifle), but that’s not why she’s so lovable. Rather it’s because she’s so effortlessly able to amuse us and tap into our insecurities via 140-character messages that Entertainment Weekly wrote up “30 times Anna Kendrick was just plain dope in 2015.” From oddly insightful comments like “Oh God. I just realized I’m stuck with me my whole life,” to frequent commentary on current events, to funny little handouts like “#boobs,” Anna Kendrick is just a delight on Twitter. It’s impossible to imagine your life not being a tiny bit better for following her.

Those five accounts can make Twitter relevant all over again for you in 2016, so happy following!