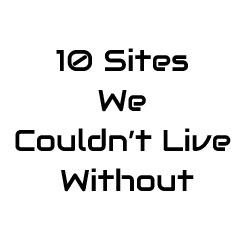 Today, it’s difficult to find a household where the internet is not accessed at least once a day. But what’s so popular about the internet? The list below details the 10 sites we couldn’t live without, allowing you to see just what the heavier internet users are doing with their time online. This list is based on the Alexa popularity rank, which is calculated using a number of the page’s statistics.

The beauty of google.com lies in its simplicity. This search engine has dominated the market since its introduction by two PhD students in January 1996, attracting a whopping 6-7% of global pageviews every day. The speed and reliability of Google‘s fantastically efficient search facility has made it popular across the world.

February 2004 saw the launch of what would become the second most popular site on the internet. Facebook attracts around 7-8% of the daily total pageviews; an unsurprising figure given the enchanting usability and addictive features this site boasts.

As of 2010, YouTube was allowing access to more than two billion videos per day, and today attracts around 5% of global daily pageviews. YouTube’s popularity lies in a simple interface coupled with provision of a commodity users actually want; videos. Whether you’re looking for music, instructions on a DIY skill, or even bluegrass banjo lessons, YouTube has it all.

Yahoo! attracts just over 1% of daily global pageviews, leaving it fourth on the list of most popular sites. The Yahoo! domain (an acronym for Yet Another Hierarchical Officious Oracle) as it is today fired up for the first time on 18th January 1995, making it one of the older sites on the list, but the rich interface has allowed it to maintain a huge following almost 20 years after its creation.

Around 2% of the daily global pageviews are directed towards baidu.com, through which approximately 56.6% of China’s total search traffic flows. This site was founded in 2000 as a way to access the tremendous resources of the internet in the Chinese language, and today offers a variety of search-engine based services, as well as image search and maps services.

Wikipedia brands itself as ‘the free encyclopaedia’. The virtually limitless pool of user-provided content it offers attracts around 0.5% of daily global pageviews. Nupedia, the predecessor of Wikipedia, was launched on 9th March 2000, with the Wikipedia site as it is today launched on 15th January 2001.

Windows Live is an email and search engine service operated my Microsoft. It attracts around 0.8% of daily global traffic, with users drawn to the site due to its branding as ‘a way to extend the Windows user experience’. This site has been active since 1st November 2005, but is now being gradually phased out in favour of the integrated style of the Windows 8 platform.

In 1994, Amazon began life as an online book retailer. Since then, this site has grown massively, and now provides electronics, furniture, and even groceries. The company’s versatility and the site’s slick interface has allowed Amazon.com to grab around 0.7% of daily global page views.

Tecent QQ, or QQ.com, was found in 1998, and today sequesters around 0.5% of daily global pageviews. The fresh interface provides users with a way to socialise in the Chinese language, and a platform from which users can web chat or share music and photos.

Taobao was launched in 2003 as a Chinese parallel to eBay or Amazon, allowing users access to an e-commerce marketplace. The interface is very similar to eBay, but the provision of services within China and in the Chinese language is a major draw for users within the country. Taobao attracts approximately 0.9% of daily global pageviews.

The list above clearly demonstrates that a simple interface with a clear selling point is the key to achieving internet popularity and standing out among other companies providing similar services. In fact, there are plenty of new sites cropping up at the moment following exactly these guidelines, for instance the UK’s latest taxi booking app site is a user friendly site that’s bound to become an indispensable resource to the UK’s population. Having a site that sticks in the mind of users for its fresh look and user-friendly design is a key way to get your company noticed, and to keep your customers coming back for more.

On Contending With Diverse Internet and Cable Providers