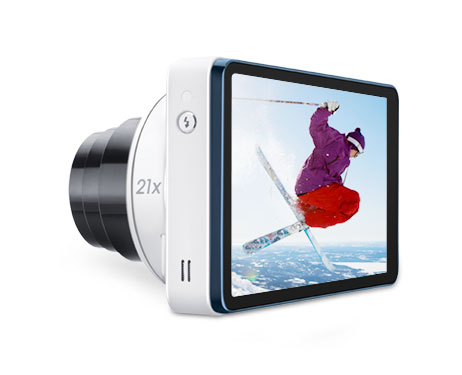 Having a fully functional, Wi-Fi enabled digital camera at the standby can benefit businesses in any industry not just photography enthusiasts or creative businesses. More companies are incorporating personality and informal interactive features into their business models, from chatting on social media, blogs, an outreach campaign and branding. As a result, visual based sites such as Pinterest are experiencing a surge in interest from businesses who want to connect to a new type of online audience. Videos, infographics, photographs and other visual media are now placed alongside text to attract online traffic. Here are five cameras which can aid your online visual campaign.

The Samsung Galaxy Camera combines the experience of a smartphone with a simple point and click digital camera. This should come as no surprise from a company which make the hugely successful Android smartphones. The camera has a huge touchscreen with a 21x optical zoom lens with Wi-Fi tools, which allow users to share their snaps with multiple devices efficiently. The camera has been noted for its poor battery life and average picture quality, however, as an overall product, the Samsung Galaxy Camera is a nifty little gadget.

This chunky offering from Fujifilm was announced in March of this year. It is set to be available from May and has already racked up a handful or reviews. Its retail price is $350 so a little cheaper than the Samsung Galaxy. It also has an impressive 44x optical zoom for a fantastic range. Users can wirelessly send stills and images onto the internet and smart devices with its Wi-Fi connectivity using Fujifilm’s app for iOS and Android. This Wi-Fi enabled camera from trusted maker Canon is hardly compact or cheap (don’t expect to find one for less than $1000). However, it has been assured that the full-frame camera is lightweight and easy to use. The Wi-Fi tools are impressively seamless and the 3.2 inch LCD display is a perfect viewing platform for its 6D high-quality photos.

If you are looking for a camera which is compact and cheap, the Sony Alpha NEX-5R is a viable contender. This camera can be found online for less than $500. The bulky 18-55mm kit lens delivers top quality images whilst the re-designed ASP-C sensor improves its sensitivity performance. Its touch screen can be tilted upwards from the body of the camera for greater range and the built in Wi-Fi includes downloadable apps which can be downloaded without the use of the computer.

This dinky 18.1 megapixel camera from Nikon comes in a range of colours: blue, red, silver, brown and black. The S9500 can be bought for just over $300 and is a standard compact point and shoot camera for everyday use. This camera is great if you are looking for a simple, straightforward digital camera with a few extra gadgets like Wi-Fi for the office.